Hi, I’m Jasmine Silvera and I can’t write in a quiet room.

The connection between music and writing for me goes way beyond filling the space with sound. I often draw inspiration from songs and melodies and use pieces of music as touchstones to get me back into the mood of a particular scene, character, or plot point after some time away. Each book’s soundtrack evolves over the course of writing, editing, revising, and editing again. Often I add or remove songs as plots change and characters grow. At the end of a book, I have a complete list of songs that will always mark a book in my memory.

Conjuring Moonlight took much longer to write, and so there was A Lot more music than usual. Here are a few of my favorites from that lineup.

For a full playlist, check out the Spotify playlist below.

I re-wrote the first several chapters multiple times, mostly Evie’s POV. When I finally knew I wanted her story to start in Jevany, I really wanted the mood of a fairytale — though maybe more of the witch in the forest cottage than the princess in the tower.

Evie and Mark’s time in the woods is an escape from the pressure and danger of both of their lives and both Luminous Max Richter and Oh What a World, Kacey Musgraves had that fairytale quality I came back to again and again.

I listened to an absurd amount of Hozier drafting Conjuring Moonlight, something about the ring of his voice and byzantine lyrics really resonated with me. Mark is used to being the strongest guy in the room (see also: most stubborn) but he meets his match in Evie, and NFWMB (warning: NSFW) hit exactly the right way. It’s one part threat, the other part promise, and if you’re an origin story nerd like me, listening to Hozier break down the song might be a lot of fun.

I know who I am when I’m alone
I’m something else when I see you
You don’t understand, you should never know
How easy you are to need

Don’t let me in with no intention to keep me
Jesus Christ, don’t be kind to me
Honey, don’t feed me, I will come back

It Will Come Back, Hozier

Mark refers to his wolf as the Big Guy, and the wolf plays an enormous part in bringing Mark and Evie together. I loved the image of the big wild wolf arriving on her doorstep time and time again: not just a meal, but the kind of satiation that comes from being seen, and appreciated for who he is.

It took me a while to get into Evie’s head. Set in Stone by Milk & Bone captured the sense of feeling stuck but uncertain about what the future brings.

I fear I lost track of the time

I think I’ve been here for a while

I hear the whispers of the night

She’s asking if I’ll be alright

I wanna live a life where nothing hurts me anymore

I wanna feel the way I felt before

Remind me how easy it used to be

Set in Stone by Milk & Bone

The acoustic version of A-ha’s Take On Me surprised me with a melancholy longing I’d missed in the radio edit, another mood for Evie. And the song algorithm gods smiled on me while I was working on the final act by shuffling up the Boss battle vibe of the Epic Trailer version by Hidden Citizen, Tessa Thompson’s I Will Go to War and a killer version of Dies Ires put me in the mood to crush some baddies.

And finally, speaking of getting in the mood, when it comes to Mark and Evie’s relationship, you know what they say about the ones that fall last…they go down hard. And Beyond by Leon Bridges & Sun Come Down by Chance the Rapper captured the intensity of their connection, while No Ordinary by Labrinth made me feel its magic. 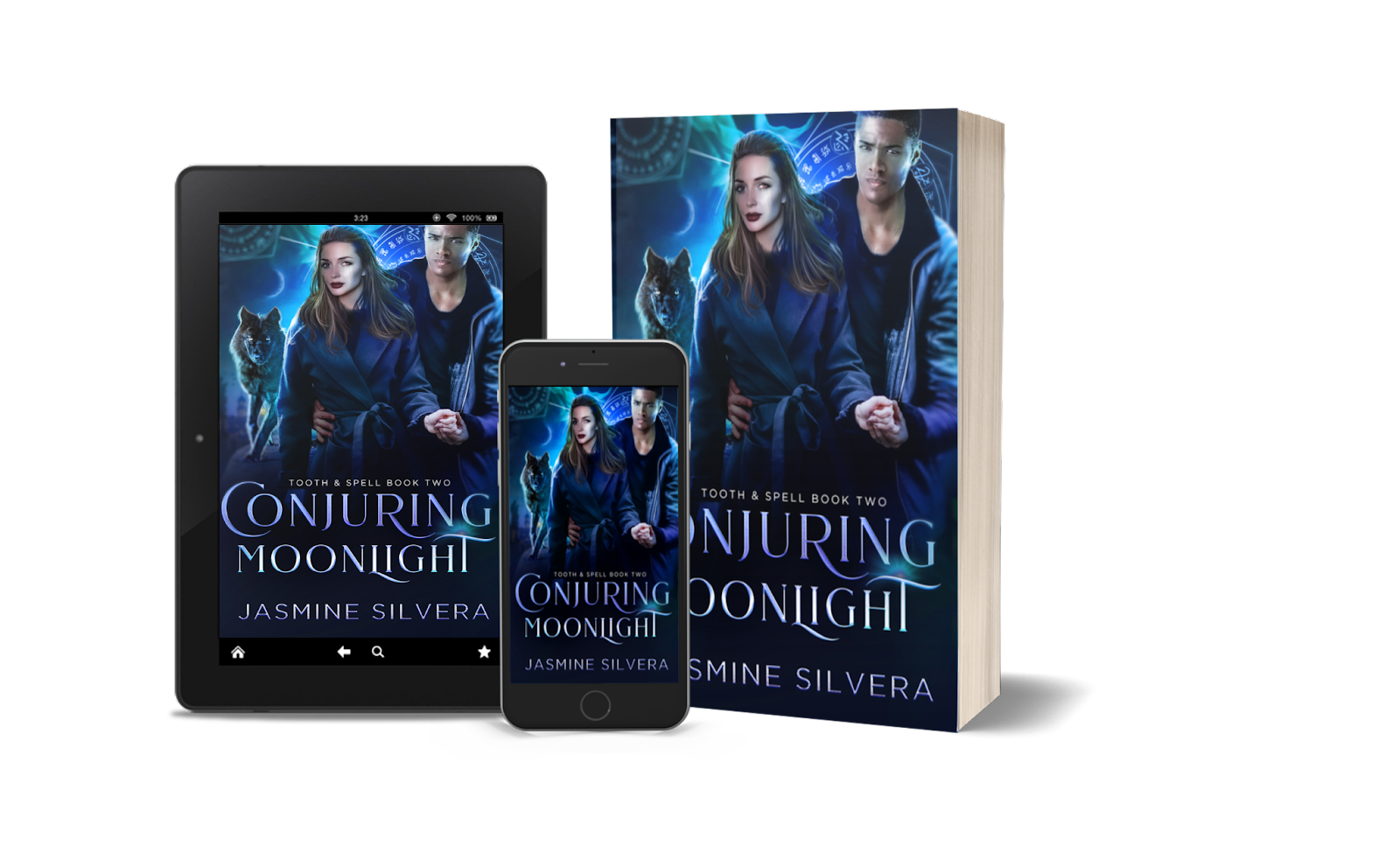 Out now! Find Conjuring Moonlight wherever books are sold.